North Hobart Oval started its existence as Hobart Town’s brickfields in 1844 before becoming a convict womenʻs housing site, an immigration depot and an invalid persons’ depot before closing in 1882 whereby the land became a rubbish dump until it was acquired for construction of a football stadium in 1921. The first official match to take place on North Hobart Oval was a TFL match between Lefroy and New Town on 6 May 1922, the match was won by Lefroy (9.8.62 to 7.13.55) before 1,000-people.

North Hobart Oval became League Headquarters for the TFL/TANFL/TFL Statewide League in 1922 and remained so until the League was disbanded in 2000. The ground hosted a total of 74 Tasmanian Football League Grand Finals between 1922–1999 and also hosted the Tasmanian State Grand Final on 20 occasions between 1923 and 1975, also hosting the Winfield Statewide Cup Grand Final in 1980. The final Tasmanian Football League match to be held at the ground was the 2000 SWL Preliminary Final between North Hobart and North Launceston (trading as the Hobart Demons and Northern Bombers at the time) which resulted in a narrow win to the Northern Bombers. After pressure from Northern TFL clubs, notably the Northern Bombers, the TFL scheduled the 2000 Grand Final to be played at Launceston’s York Park, marking the first (and ultimately last) TFL Grand Final to be held away from North Hobart Oval since 1921. The first official radio broadcast of a Tasmanian Football League match took place at North Hobart on 9 May 1931 when former Cananore player “Dinah” Green commentated on the match between North Hobart and Lefroy for radio station 7ZL. After the disbandment of the TFL, the Southern Football League made the ground its Grand Final venue in both the Premier & Regional competitions and has done since 2000, it also hosts the Old Scholars Football Association Grand Final each year. The Tasmanian Devils VFL side also played its Southern home fixtures at North Hobart from its inception in 2001 until AFL Tasmania moved the team to Bellerive Oval in 2005 where its Centre Of Excellence was established and it could more adequately host corporate functions.

North Hobart Oval has hosted three Australian National Football Carnivals.
The first was in August 1924, which was won by Victoria before an official attendance of 60,705 for the entire carnival. In 1947 a total of 67,271 attended the carnival which was played in deplorable conditions – including one match where a dog ran onto the ground and buried a saveloy in the mud in the centre of the ground. Victorian once again triumphed, this time on percentage. The 1966 Carnival was the last to be played in Tasmania. A total attendance of 91,347 were present to view the matches played and once again, Victoria took the title defeating Western Australia in the final.

Interstate and State of Origin matches

The ground hosted numerous intrastate, interstate and state of origin clashes in its history. Some of the most memorable are Tasmania’s triumph over Western Australia by 2-points in 1970 and the three State Of Origin matches held there in 1989 where 12,342 saw Tasmania hold Victoria to halftime before Victoria raced away to win.  24 June 1990 saw Tasmania finally get its revenge on the Big V, with a crowd of 18,653 packing North Hobart Oval, Tasmania raced away in the last quarter before a roaring crowd to record a 33-point win, its first over Victoria since 1960.

And in 1991 a peculiar draw from the Australian Football League (AFL)scheduled the match to be played at 11am on a Tuesday morning (a working day in Hobart) – despite this, 14,086-people turned out to watch Tasmania fall agonisingly short after leading the Victorians for much of the game, the Victorians rushing home with a late flurry to win by 12-points. Subsequently, through the rest of the 1990s Tasmania went on to defeat the South Australia, the Western Australia and the Victorian Football Association (VFA), all at North Hobart Oval.

North Hobart’s first VFL/AFL match took place (as part of a National Round) on 14 June 1952, where 18,387 crammed in to witness Fitzroy beat Melbourne by 20-points, 13-12 (90) to 10.10 (70). Fitzroy would host two AFL Premiership Season matches in each of 1991 and 1992 but, due to the uncompetitive nature of Fitzroy at the time (including a 157-point belting by Hawthorn, the club’s worst ever defeat) crowds were lower than expected and the cash-strapped Lions pulled out of the experiment at the end of 1992. There were numerous other Foster’s Cup and Ansett Cup pre-season matches held there during the 1990s.

The largest crowd for any of these matches was over 19,300 in 1996 for a Hydro Challenge pre-season practice match between the previous season’s Grand Finalists, Carlton and Geelong which was won by Carlton.

North Hobart Oval has hosted numerous other events throughout its long history. Cricket, Association football (soccer), ANZAC Day sports events and athletics have all been staged there at various times. An Australian XI played an association football friendly against Hungarian club Ferencvárosi TC in 1957,[2] and two world records were established at North Hobart in athletics when Betty Cuthbert set a new world record for the 220-yard sprint on 7 March 1960 and Ron Clarke knocked off Vladimir Kuts (USSR) 5000m record on 16 January 1965. In 1959 a Billy Graham crusade set an all-time attendance record for the ground with a crowd in excess of 25,000 attending, and in 1987, thousands attended a Military Tattoo at the ground. 2012-2017, National Rugby League Club Melbourne Storm Player 1 Home Game From 2012 To 2017.

The first of the grandstands to be built at North Hobart was the Ryde Street (George Miller) Stand in late-1921 which badly damaged by fire in June 2012 and sits currently awaiting a report to see whether it can be repaired or will have to be demolished. The Argyle Street Stand (known today as the Horrie Gorringe Stand) was an 840-seat stand that began construction in 1923 and was opened in time for the 1924 Australian National Football Carnival. It remained unaltered until the rear-half of the structure was gutted-out in June 1991 to build the North Hobart Football Clubrooms which in years to come would be the headquarters for AFL Tasmania. The Letitia Street Stand was also erected in 1924. This was built of wood and was in a poor state of disrepair by the time it was burned down in an arson attack in May 1987, later replaced by the A$1.25 million Doug Plaister Stand that was completed in 1988. The concrete Roy Cazaly Stand was built during 1960/1961.

Other works carried out were the building of players’ tunnels at the foot of the Horrie Gorringe Stand and building the terraces (still in place today) during 1964/1965. The main, electronic scoreboard, opened as the Gorringe Electronic Scoreboard, sponsored by the Donald Gorringe company in North Hobart, was constructed in 1972 and opened in time for the 1972 TANFL Grand Final. After being in a rundown and precarious condition for several years, its 569 light globes were removed and replaced by the Hobart City Council in May 2011, with a flat screen installed in place and new time clock installed. The upgraded scoreboard was opened for use on 21 May 2011 for a TSL match between North Hobart and Clarence.

North Hobart Oval holds the top five of the top six ground attendance records in Tasmanian football history, including the highest roster match attendance ever recorded of 8,840 in 1967: 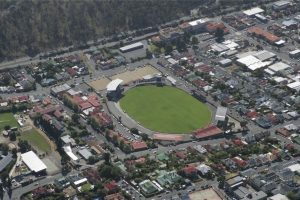 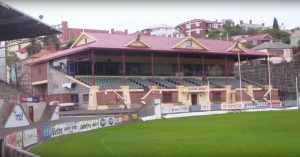 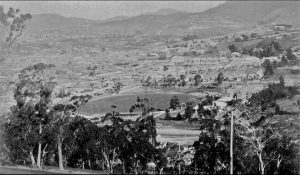 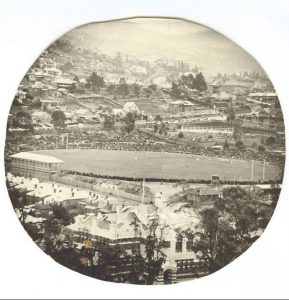 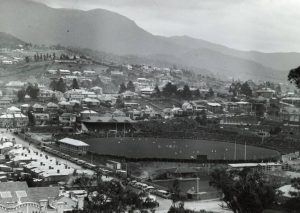 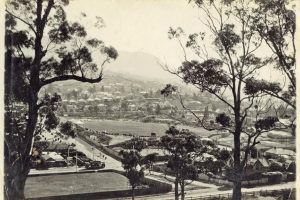 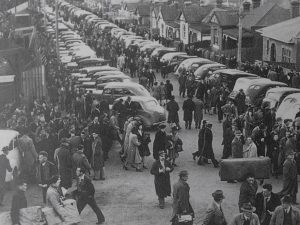 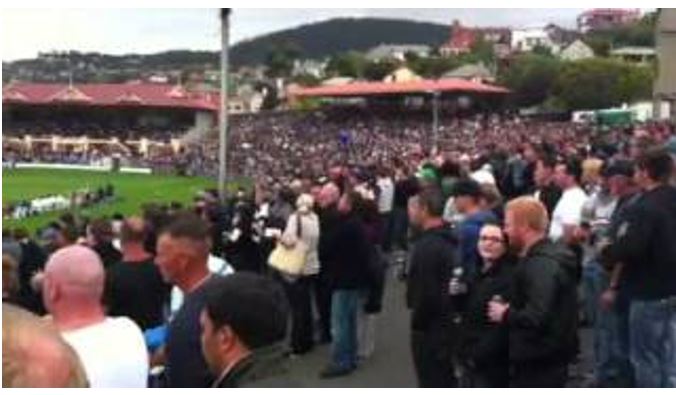