Charity Match for the Alfred Hospital 1949 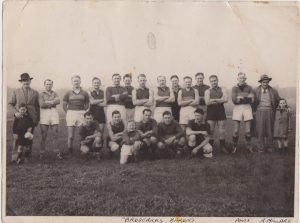 Tom Broderick  who the above team is named after (far left) and Tom’s son Brian Broderick standing in front of him with the Alfred Hospital Collection Tin
The kid kneeling in the front of the photo is Tom’s othes son Brendon Broderick.

The below information is from Brian Broderick who emailed us to provide some more information about the above photo:

Tom Broderick is the gentlemen standing on the far left of the photo, I am his son standing in front of him with the Alfred collection tin in my hand.  My elder brother, Brendan is the kid kneeling in the front.  The photo was probably taken 1949, I was 7 and Brendan was 10.

The game was played in the far corner of Fawkner Park from the pub, so opposite the front entrance to the Alfred.  My brother’s memory was that it was played on a Sunday afternoon.  It was a one off between the two pubs.  That Sunday morning league had nothing to do with it.  The opposition was called Shepherds Snipes.

Don’t know any of the names, but recognise the chap in the hat at the right end.  He was a stalwart at the pub.  The chap fourth from left in the front five may be Keith Hartley.  If so, and I’m by no means sure it’s him, he opened a barber shop about that time in Toorak Rd near Punt Rd, a door or two from the pub on the corner.

Article that appeared in the Herald Sun searching for Brodericks Barons 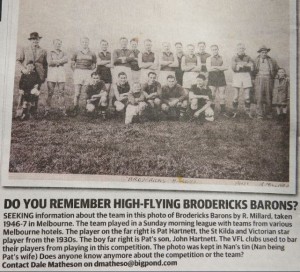 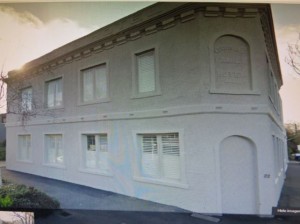 Thanks for your emails of 13 May 2016 concerning a football match organized to raise funds for The Alfred.  The match was apparently played in the later 1940s with organisers including Brodericks Barons, Morrison family hotel in South Yarra and the Argo hotel.

The material you supplied including the football team photograph provide faces to some of The Alfreds many benefactors overs its lifetime.  Donors came from all walks of life, the SPs often were good contributors to worthy causes . These funds often supplied [or contributed to] important medical equipment which helped make The Alfred the world class treating, teaching and research hospital it is today.

While not necessarily related to these papers and the football match mentioned, I note that in the Alfred Hospital Eightieth Annual Report for year ended 30th March 1950 under Collection Boxes [page 56] that a donation of  £14/4/7 was made by Brodericks & Shepherds Hotels.  A donation of this size was very significant in 1950 [Average yearly wage for managers and clerks was £433 1s 4d for males and £162 10s 6d for females, source http://guides.slv.vic.gov.au/c.php?g=245232&p=1633038].

Thanks again for this information.